A. propinquus is used in traditional Chinese medicine for healing and for diabetes.[4] A. propinquus has been asserted to be a tonic that can improve the functioning of the lungs, adrenal glands and the gastrointestinal tract, increase metabolism and sweating, promote healing, and reduce fatigue.[5]

An extract of A. propinquus called TA-65 can activate telomerase, extending the lengths of the shortest telomeres which protect the terminal DNA at the ends of all chromosomes.[7] The active constituents of the roots (Radix Astragali) include polysaccharides,triterpenoids (astragalosides)[8] as well as isoflavones (including kumatakenin, calycosin and formononetin) along with their glycosidesand malonates.[9]

Lingzhi may possess anti-tumor, immunomodulatory and immunotherapeutic activities, supported by studies on polysaccharides, terpenes, and other bioactive compounds isolated from fruiting bodies and mycelia of this fungus (reviewed by R. R. Paterson[17] and Lindequist et al.[43]). It has also been found to inhibit platelet aggregation, and to lower blood pressure (via inhibition of angiotensin-converting enzyme[44]), cholesterol, and blood sugar.[45]

Laboratory studies have shown anti-neoplastic effects of fungal extracts or isolated compounds against some types of cancer, including epithelial ovarian cancer.[46] In an animal model, Ganoderma has been reported to prevent cancer metastasis,[47] with potency comparable to Lentinan from Shiitake mushrooms.[48]

The mechanisms by which Ganoderma lucidum may affect cancer are unknown and they may target different stages of cancer development: inhibition of angiogenesis (formation of new, tumor-induced blood vessels, created to supply nutrients to the tumor) mediated by cytokines, cytoxicity, inhibiting migration of the cancer cells and metastasis, and inducing and enhancing apoptosis of tumor cells.[17] Nevertheless, Ganoderma lucidum extracts are already used in commercial pharmaceuticals such as MC-S for suppressing cancer cell proliferation and migration.

Additional studies indicate that ganoderic acid has some protective effects against liver injury by viruses and other toxic agents in mice, suggesting a potential benefit of this compound in the treatment of liver diseases in humans,[49] and Ganoderma-derived sterols inhibit lanosterol 14α-demethylase activity in the biosynthesis of cholesterol .[50] Ganoderma lucidum compounds inhibit 5-alpha reductase activity in the biosynthesis of dihydrotestosterone.[44]

Besides effects on mammalian physiology, Ganoderma lucidum is reported to have anti-bacterial and anti-viral activities.[51][52] Ganoderma lucidum is reported to exhibit direct anti-viral with the following viruses; HSV-1, HSV-2, influenza virus, vesicular stomatitis. Ganoderma lucidum mushrooms are reported to exhibit direct anti-microbial properties with the following organisms; Aspergillus niger, Bacillus cereus, Candida albicans, and Escherichia coli. Other benefits were studied such as the effect of lowering hypertension, cholesterol, and anti-inflammatory benefits through the ganoderic acid properties. 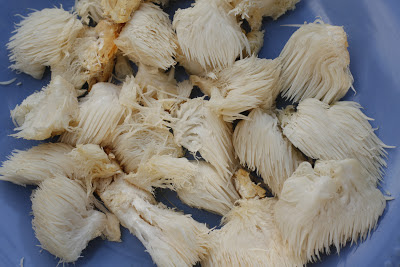 In traditional Chinese medicine this mushroom has long been considered a medicinal mushroom and a study on rats in 2005 showed that some compounds in the mushroom, like threitol, D-arabinitol, and palmitic acid may have antioxidant effects, may regulate blood lipid levels and may reduce blood glucose levels.[1]

It has been reported that pills of this mushroom are used in the treatment of gastric ulcers and esophageal carcinoma.[2]

Scientists have investigated this mushroom for possible anti-dementia compounds. Primary research has demonstrated the following: